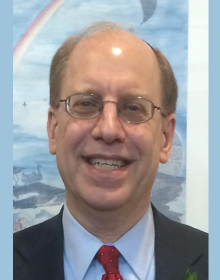 The Silver Family moved to New Rochelle specifically to join Beth El Synagogue Center after attending the first Family Kallah in 2001.  Mark, Candy, and Shira have been active members of the community ever since, enjoying its vibrancy and warmth.

Mark is Beth El’s immediate past President, having served as chair or co-chair of various shul committees, including the Ritual Committee, ICAR (a strategic planning initiative), and the Vision Action Team (charged with implementing the strategic vision that emerged from the Journey process).  He is co-author of Beth El’s last three mission statements, spanning a dozen years.

Mark grew up in Philadelphia and continues to root for the Phillies, Eagles, Sixers, and Flyers.  He graduated from Akiba Hebrew Academy and attended Camp Ramah in the Poconos.  Mark received a B.A. in Mathematics from the University of Pennsylvania and a Ph.D. from Penn’s Wharton School.  He has been a professor of Information Systems at UCLA, NYU, and Fordham.  He is the author of a book and various articles on Information Technology.

Mark has always played leadership roles in the Jewish community.  He served as President of Hillel at Penn and as a member of the National B’nai B’rith Hillel Commission.  His activities at the Jewish Federation of Greater Philadelphia included being treasurer of the Jewish Campus Activities Board and co-chair of long-range planning for the Leadership Development Committee.  In New York, he served on the METNY Region Board of Directors of the United Synagogue of Conservative Judaism and the New Rochelle Executive Committee of UJA-Federation.

A lifelong supporter of Israel, Mark was privileged to participate in the Faculty Fellowship Summer Institute in Israel sponsored by JNF, SPME, and Media Watch International.  He values his Israeli academic colleagues and delivered the keynote address at the Annual Conference of the Israel Association for Information Systems.  He is also a fan of Israeli music, television, and movies, which give him a chance to improve his Hebrew.

Mark appreciates the support of his family over the years.  He and Candy are proud that their daughter, Shira, an alumna of SAR High School and the University of Pennsylvania, is passionate about her Judaism and actively involved in the Jewish community.  At Penn, she was President of Hillel, following in her father’s footsteps.

Mark is thrilled to be honored together with Allison and Alan Kellman, who have made such significant contributions to Beth El.