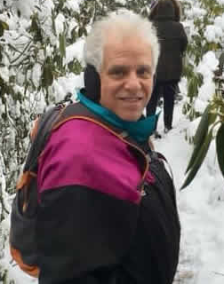 Register / Place Tribute
Share with your family and friends.
Sid Diamond has been living in the Washington DC area since 1977, after attending Yeshiva University in Manhattan, and receiving his BS in Microbiology from University of Maryland.  He spent 2 years in a doctoral program at Georgetown University, before switching gears and becoming a computer consultant, which he’s been for the past 37 years.  He’s also a certified Option Process Mentor/Counselor, which has been a great benefit, while volunteering for Bikur Cholim of Greater Washington.
Sid grew up in Baltimore, Maryland, 1 of 4 children to parents who both survived the Holocaust.  He watched how his parents helped so many people, especially those “newcomers”, as they called them, who came mostly from Poland and the former Soviet Union, looking for a better life.  Knowing what they went through to survive the Holocaust, and what it was like to come to a new country, not knowing the language, he saw how they helped these folks, both friends/family and strangers,  to make their transition a little easier, with opportunities and support, to start their new lives.

BCGW has been a huge gift for Sid, as a way to be there for people, whether it’s chatting along the way to a doctor’s appointment, delivering delicious meals, or just spending time listening to someone who may not have anyone to hear them.
Sid, along with Barbara, raised 4 kids (Lindsey, Benjamin, Jennifer, and Ariela) in Rockville/Potomac.  Sid is a member of Beth Sholom Congregation.
Susie Ben-David
$250.00
Kosher Sustenance
*$18.00
Orlo
*$5,000.00
Annette Ehrlaich Lakein
$250.00
Lori & Ed Tolchin
*$500.00
Mazal Tov Sid, Arlene & Marcia!
Thanks to you and all the Bikur Cholim volunteers,
the Washington Jewish community is stronger and better!
With much appreciation,
Lori & Ed Tolchin
Elaine & Allen Minzer
*$1,800.00
Mazal tov to all of the honorees
Audrey and Neil Siegel
*$1,800.00
Mazal tov to wonderful BCGW honorees: Arlene, Marcia and Sid!
Each of you has contributed more to our community and BCGW than we could describe in the space allowed!
May you be blessed with many happy, healthy, giving years.
Special thank you to Gary Winters for his leadership and generosity of spirit and to Rabbi Elie Gayer and Leah Snyder for their professionalism and boundless compassion.

Tamar and Reuven Zakheim
*$1,000.00
Sarah and Buddy Stern
*$1,000.00
Thanks to the honorees and all the amazing work of Bikur Cholim. All of your dedication and efforts during these difficult times are very greatly appreciated. We are so fortunate to have such an amazing organization in our midst.
Administrative Login   Play Ads Full Screen With Controls
Powered by Wizadjournal - Developed by PBCS Technology
Servers: web1 mysql4 Event: 1551