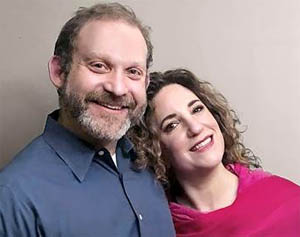 The summer of 1999 was a life-changing time for Sandy, Brad and their then-infant son Benjamin, when they began a new life in Riverdale. They always had solid conservative Jewish roots in their hometown of Atlanta, so it was only natural for them to seek out new ones by joining a synagogue in their new community. Upon
discovering that there was only one conservative shul in the area, Sandy and Brad decided that this must be the one to join, and so
began their commitment to CSAIR. Over the next 20 years, this special home hosted their daughter Annie’s baby naming, eleven years of Hebrew school, Ben’s bar mitzvah, Annie’s bat mitzvah,
and many, many committee meetings, holiday gatherings, and
shabbat morning shots of scotch.

Speaking of committees, Sandy spearheaded many of the programs that benefit the shul and
are still in effect today. She co-led with Sara Voit the first CSAIR Rosh Chodesh groups for
teenage girls. Through her work on the Inclusion Committee, Sandy also initiated the Greeter
Committee and coordinated it for three years. She currently sits on the Child Protection
Committee and plays a role in the creation of the shul’s official child protection policy. Sandy
served on the Education Board for many years, the Club 613 committee, and the cantorial
search committee which recommended the hiring of Cantor Stevens. In 2015, Sandy gave a
stirring d’var torah which focused on disability awareness and advocacy, her professional and
personal passions in life. Lastly, she helped launch CSS at CSAIR as one of the four original
team leaders, and she continues to serve in that role today.

Over the years, Brad has used his marketing and advertising skills to benefit CSAIR. His first
tasks were writing and executing ads promoting Hebrew School registration and High Holiday
Services. He also served on the committee to update the shul’s mission statement to reflect its
updated message of inclusion and acceptance. For the last six years, Brad has served on the
Gala Committee, heading up its marketing effort and writing the promotional copy for posters,
videos, emails, ads, social media posts, and other communication to the congregation. He also
helped create many videos of past Gala honorees, shown at Gala events as well as shared
online. Many times, Brad has been asked by CSAIR leadership to brainstorm communication
ideas for Kol NIdre and Hebrew School fundraising efforts. He also was a one-time bass player
at a Purim shpiel, which taught him that he needs more practice.

CSAIR has truly become a family for Sandy and Brad, which has provided peace of mind not
only for them, but also for their parents, siblings, aunts, uncles, cousins, and one remaining
grandmother (a.k.a. Bubbie) who live down South. They remain committed to being a part of its
congregation and helping out as much as they possibly can.
Cliff Nerwen 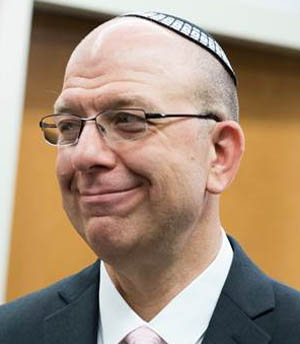 Cliff was born in Montreal (and remains a Montreal Canadiens hockey fan to this day).  During his early years in Canada he learned about the importance of synagogue membership, involvement and commitment from the example set by his parents, active leaders in the small Conservative synagogue to which his family belonged.  He moved with his family to Connecticut in 1979, and subsequently settled in Riverdale.  He is proud to note that he found a spiritual home joining CSAIR in June of 1991, well before actually moving to the community in July.

That spirit of commitment and volunteerism, coupled with a desire to create a safe and inspiring community where all members can feel comfortable and engaged, has led to his involvement at CSAIR.  Among other roles, Cliff has been a member of the Board of Trustees for many years, chaired the Ritual and Religious Life Committee, and is a past President of the synagogue.  He currently chairs the Child Protection Committee and has lead the charge in ensuring that our community is a safe one for those members that are the most vulnerable, our children and teens.  He is quite proud that CSAIR has become a leader among congregations in its child protection efforts.  Camp Ramah is one of his other passions.  There he has furthered the cause of keeping children safe and healthy locally as the medical director of Camp Ramah in the Berkshires, and nationally as the chair of the National Ramah medical committee.  Most recently he has taken on the role of Board Chair of Sacred Spaces, an organization that aims to prevent and address child abuse and other abuses of power in the Jewish community.

A graduate of the Joint Program (Jewish Theological Seminary and Columbia University) and the University of Connecticut School of Medicine, he is an academic general pediatrician on the faculty of Cohen Children’s Medical Center of New York.

Cliff is the very proud father of two adult daughters, Renana and Deena, who both grew up in CSAIR.  He is particularly grateful to them, for all of their support over the years and for tolerating all of the shul meetings that their father has had to attend!  Recently married to Shulamit Lerner, and step father to Moshe, Cliff is so appreciative for the warm welcome that CSAIR has provided the newest members of his family.
CSAIR Sisterhood

CSAIR Sisterhood is a dynamic organization of approximately 150 women with the common mission of supporting our Synagogue and each other.  We are affiliated with the Women’s League of Conservative Judaism, whose aim is to strengthen and unite Synagogue women’s groups and their members, to support them in mutual efforts to understand and perpetuate Conservative/Masorti Judaism in the home, Synagogue, and community, and to reinforce their bonds with Israel and Jews worldwide.  We are an inclusive, intergenerational, and progressive affiliate of CSAIR and we welcome all Jewish women.

Our Sisterhood offers Synagogue women numerous personal experiences such as the companionship of other women, training for future leadership, self-governance, control over their own decisions, and pride in our achievements.   Sisterhood, by offering opportunities for self-fulfillment for its members, strengthens its members dedication to our Synagogue.

Sisterhood sponsors many Synagogue-wide events during the year including Sisterhood Shabbat, the Rabbi’s Tuesday morning Bible class, Selichot evening program, a Sukkot lunch, Purim Mishloach Manot, and our Judaica gift shop.   Through these and other initiatives, Sisterhood raises $25,000 annually for CSAIR.

We are proud to be honored at the gala this year.  Please join us as members and support our programs.  We need your help to continue our work.
Administrative Login   Play Ads Full Screen With Controls