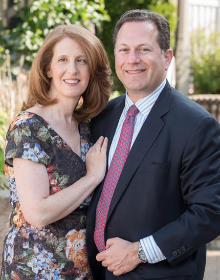 Tickets/Place Ad/Donate
Share with your family and friends.
Danya and Marc joined Temple Israel Center in 2000. During their first Shabbat at TIC, they were delighted to get a sneak peek (thanks Linda Darer!) at the new Milstein Sanctuary which was still under construction. Danya and Marc were excited to discover TIC’s robust intergenerational community where they developed friendships with congregants and families of every age and stage.

Marc is the Immediate Past President of TIC and a familiar face to most of our members by virtue of his high-frequency and informative communications, personalized emails, coffee get togethers, and genuine interest in knowing each and every congregant. He is grateful to have had the privilege of serving TIC as President at a critical time in its history, transitioning from Rabbi Emeritus Gordon Tucker to Interim Rabbi Matt Futterman to Senior Rabbi Annie Tucker.

Marc has served on TIC’s Executive Committee for 15 years, led or participated in multiple searches for clergy and other talent, and served on more committees and task forces than he can remember. An added reward has been the chance to get to know so many wonderful members and TIC staff. Some of Marc’s favorite TIC-related activities include chairing the time capsule committee for TIC’s 2008 centennial celebration (it’s buried behind the building!), serving on the Budget Committee, founding the TIC Scotch Club, and playing on TIC’s softball team for 20 years (including winning the league championship as a huge underdog in 2006 and the last 10 years as manager). A believer in active volunteerism, Marc donates his time, skills, and experience to non-profit institutions. Marc is on the American Jewish Committee Westchester/Fairfield Board, Jewish Theological Seminary Religious Leadership Advisory Board, United Synagogue of Conservative Judaism METNY District Advisory Council, Leffell School Finance Committee, and Westchester Parks Foundation Board and Executive Committee.

Born in Boston (in the same hospital as Danya!), Marc grew up in Forest Hills and then Manhattan. He is a proud graduate of NYC public schools, including Stuyvesant High School, and attended Park Avenue Synagogue Hebrew School through twelfth grade. Marc studied economics at the University of Michigan and received his M.B.A. from Columbia Business School. He has been an investment banker focused on the insurance industry for over 25 years and is currently at Macquarie Capital. Marc is an aspiring cook, wine connoisseur, music lover, and a loyal and long-suffering Mets, Jets, and Islanders fan.

Besides generously offering up her husband to TIC during his three-year presidency, Danya has also served the synagogue over the years. When Danya and Marc’s children (all TIC Nursery School graduates) were young, she served as co-chair of the Nursery School Advisory Board, on two Nursery School Director Search Committees, and as Project Manager of the Nursery School classroom renovation project. Danya has also been a member of the Education Council, the Nominating Committee, B’nai Mitzvah Task Force, and Senior Connect. She was Co-Chair of multiple TIC gala celebrations and has led or contributed to several other gala committees, including for the event honoring Rabbi Gordon Tucker upon his retirement. Danya often helps cook for the Friday night Eat Pray Learn dinners, where the Bermans’ table is especially popular because they always treat their tablemates to excellent bottles of kosher wine smuggled from home! Danya has also been an active volunteer at The Leffell School and with Harrison Meals on Wheels.

Danya grew up in Boston attending Solomon Schechter Day School, Brookline High School, and Hebrew College’s Prozdor program. Temple Emanuel in Newton was her family’s spiritual home and this community became a foundational part of her Jewish experience. In her professional life, Danya is a psychiatric social worker, most recently at the Guidance Center of Westchester for 20 years and, prior to that, at New York Presbyterian Hospital - Westchester Division. Danya enjoys hiking, Israeli music, and planning unnecessarily detailed Israel itineraries. She also enjoys baking and holds especially high standards for pareve desserts.

Danya and Marc met at the University of Michigan Hillel in 1987, where Marc, a junior, headed a pro-Israel student group which Danya, a freshman, signed up for. In addition to the many Hillel activities they worked on together, both served in significant roles on UM Hillel’s Governing Board, Danya as Chairperson and Marc as Chair of Allocations. They learned during their early dating days that both had vacationed most summers during their youth on Martha’s Vineyard and are still searching their parents’ cardboard boxes for a photo of one that shows the other in the background.

The Bermans have three children.  Sharona (18), is a Leffell School graduate on the Kivunim gap year in Israel. During the gala, she is scheduled to be in Turkey, a stop on a tour of nine countries over ten weeks. In the fall she will enroll at Michigan, following in her parents’ footsteps. Noah (15) and Shayna (13) are students in ninth and eighth grades, respectively, at The Leffell School.

The Bermans are honored to be recognized for their contributions to TIC and are grateful to its entire staff and the member volunteers whose dedication, care, and hard work make TIC’s mission possible. They are so pleased to share the gala honor with Lissy and Ben Carr, who bring tremendous commitment, energy, and love to TIC, and look forward to Lissy and Ben’s continued involvement as leaders for many years to come.