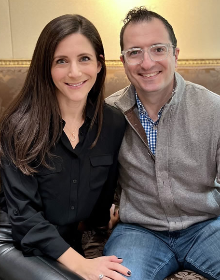 Tickets/Place Ad/Donate
Share with your family and friends.
Lissy and Ben Carr moved from the Upper West Side to White Plains in the summer of 2015, with their two young daughters, Gemma and Sia. Though they were raised in Jewish communities – Lissy attended Solomon Schechter Day School in West Orange, NJ, and her family belonged to Temple Beth El in South Orange; Ben attended Mt. Scopus College, a Jewish day school in Melbourne, Australia – they were not specifically seeking a shul community. And yet, with just a few invitations to Shabbat dinners and holiday meals, and a fortuitous Nursery School buddy matchup with Jill Bohrer and Jill’s nursery school PTO co-chair, Jessica Levinson, Temple Israel Center became the Carrs’ second home.

In September 2016, Lissy happily agreed to be the next PTO Co-chair. Volunteering for the school was a natural and quick way to get to know the clergy, administration, and larger TIC community. Soon thereafter, Lissy was asked to join the TIC Annual Gala & Fundraiser committee, yielding many warm relationships with the intergenerational group of volunteers working on the event.

A stay-at-home mom with energy to spare, Lissy directed her professional experience in film, television, corporate and institutional event planning and facilitation toward volunteer work for TIC. Lissy has served as a member of the TIC Board of Trustees; sat on a variety of search and membership committees; led children’s Shabbat services; and collaborated with the staff and clergy to create events to enhance member engagement, a particular challenge during the pandemic.

Ben’s first TIC experience was a Scotch-tasting night, likely organized by fellow honoree Marc Berman. Ben was struck by the friendly warmth and inclusiveness of the community.  At the Carrs’ first Shabbat service shortly thereafter, he was inspired by the sermon and continues to be impressed by TIC’s brilliant lay members and its new generation of thoughtful clergy.  This community’s combination of modern, ancient, religious, and secular thought, and its strong focus on ethics and social action, provides precisely the spiritual and intellectual environment Ben wanted for himself and his family.

Ben has volunteered on past Galas, delivered mishloach manot, and designed dreidel games for the TIC chanukah activities. He has enjoyed stuffing envelopes in the TIC library, event boxes in his house for last year’s virtual Gala, and most of all, himself at kiddush.

Lissy and Ben met in Israel in 1999 while Lissy was on her Schechter senior trip and Ben was living there for a year with the Zionist youth group, Habonim Dror. They stayed in touch while Lissy attended Barnard College, and Ben attended the University of Melbourne.

After graduation and twenty-two years on the East Coast, Lissy felt a change was in order and traveled to Australia, knowing only one person - Ben Carr. He was her anchor and their six-year friendship turned romantic. After four months in Oz and two months backpacking throughout Southeast Asia, Ben started a job in Sydney and Lissy returned to New York to begin a career in TV and film production, starting with a gig on The Apprentice (Martha Stewart’s post-incarceration comeback attempt…NOT the other one). She and Ben were living their own long-distance reality show with short visits overseas until Ben moved to the US in 2006. They were married at Park Avenue Synagogue in 2009.

Ben is currently the Director of Quantitative Analytics for the U.S. arm of Axpo, a Switzerland-based energy firm. Lissy is the founder of Lissy Carr Events, LLC, an event planning company specializing in bar & bat mitzvahs, weddings, and other milestone moments worth celebrating! In 2021, thanks largely to the TIC community that has always supported her, Lissy Carr Events was voted Best in Westchester for Event Planning.

Lissy and Ben wish a hearty Mazel Tov to Danya and Marc Berman, whose service inspires the whole community. The Carrs are honored to share this evening with such esteemed members of the community, along with their friends and family.