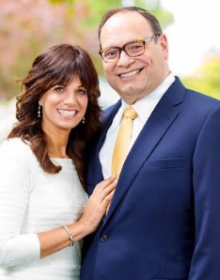 Sponsor/Donate/RSVP
Share with your family and friends.
Cherie and Steve Mayer- Throughout the last five years that Cherie and Steve have lived in the local community, Steve has been active as a board member and committee member at BPY. When they moved to Teaneck, they decided to search for a yeshiva day school in which they could be active  and be proud. As soon as they met Rabbi Zucker and he gave them a tour, BPY became an easy choice. One year later, Shlomo Cohen, their grandchild, enrolled at BPY. The next year, Meir and Shua Cohen joined him. The children have been extremely happy at BPY; it was a match made in heaven. Cherie and Steve are proud grandparents of BPY students.

Cherie is a real estate agent while Steve is currently teaching at Yeshiva University and Fairleigh Dickinson University. He retired from being a partner in a public accounting firm in 2019.

In the past, Cherie was active in several schools as well as various well-known charities. Steve also was active in various charities and had multiple leadership roles in a yeshiva day school.

Cherie and Steve have seven children. Cherie grew up in Los Angeles, while Steve grew up on the Lower East Side of Manhattan. Moving to Teaneck five years ago was an easy choice; almost as easy as being involved in BPY.