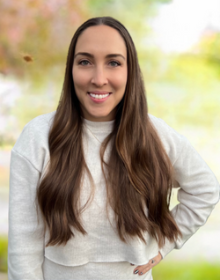 Sponsor/Donate/RSVP
Share with your family and friends.
Jacklyn Cohen is the proud mom of Yael (3rd grade), Doron (1st grade), Noa (Nursery), and Tali. Jacklyn lives in Englewood with her husband, Yoni, where she serves on the board of the Benaroya Sephardic Center at Congregation Ahavath Torah. Before moving to New Jersey, Jacklyn worked as a teacher at the Ramaz ECC, and studied Education and Psychology at Brandeis University.

Jacklyn got involved at BPY right away–inspired by some of her friends who were active in the PTO–but it was the smile on her children’s faces every time they saw her in the building that got her hooked. After serving as PTO co-president with Ariel Harary, and a year later with Leah Benhamou, Jacklyn continues to volunteer in different areas of the school, and Yoni recently joined the BPY Board of Trustees.

Originally from Panama, with a Sephardic father and Ashkenazi mother, Jacklyn has a special appreciation for BPY’s unique ability to educate her children without compromising any part of her tradition. Additionally, she loves the tangible warmth felt in the hallways at BPY, and values the Ivrit b’ Ivrit Judaic program and how the school's mission drives faculty and parents.

While Jacklyn is still in her early days at BPY, she feels that there is no such thing as getting involved too soon. The earlier a parent gets involved, the more years they will have to see a return on their investment of time and effort. She looks forward to being part of the BPY family for many years to come.