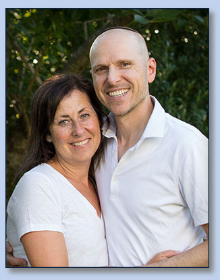 Debra and Dov first met while living on the Upper West Side of Manhattan, which is also where they first began married life together. After adding Ruthie and Josh into their small two-bedroom apartment, the young couple decided it was time to move to the ‘burbs. Debra had grown up in Montreal, Canada, which was a bit too far away to consider as an option. Meanwhile, Dov spent the earliest years of his life in West Orange, before his family relocated to Allentown, Pennsylvania, for the rest of his childhood. By the time Debra and Dov were looking for a suburban home, Dov’s parents had returned to West Orange, and his older brother Zvi had followed them there. Accordingly, it did not take long to narrow down West Orange as their obvious destination.

Enrolling their children at JKHA was only natural, as Dov still had fond memories of his early years spent at its predecessor HYA in West Caldwell. Before long, the family added rambunctious twin boys Benjamin and Daniel, quickly filling up their new home (and the school bus). The Landos quickly came to appreciate the value they received from JKHA, and later RKYHS. The beautiful facilities, caring faculty, and excellent education exceeded anything they had seen before, and reinforced the wisdom of their having moved to West Orange.

Debra and Dov both had exemplary role models for community involvement that inspired them to follow suit. Debra’s mother Esther Hutman spent time as Sisterhood President and a member of the board at their shul TBDJ, where her father Monty Hutman served as Gabbai for several years; and they are both pillars of the Montreal Jewish  community. Dov’s mother Susan Lando was an active member of both shul Sisterhood and Emunah. Dov’s father David Lando z”l was a consummate community leader wherever he lived throughout his life, including leadership positions on boards and committees of both shul and school, as well as providing technological support and guidance to the OU. Dov was fortunate to join the board of directors of AABJ&D during his father’s final year as long-serving Chair of the Board. Dov’s father was a role model for his children and so many others, and Dov continues in his effort to emulate his father’s dedication to supporting Jewish community and education.

Debra works as a speech therapist focusing on treatment of young children, a career she always balanced with her time spent raising their four children. Dov works as a lawyer in the financial services industry, currently serving as the General Counsel at Boothbay Fund Management, a multi-strategy multi-manager platform based in NYC. Debra has served our community in various ways, including participation in AABJ&D Sisterhood and various Chesed Committee activities. She has also served on the RKYHS Liaison Committee and was a dedicated lunch volunteer for many years.  Dov began his communal involvement at AABJ&D, where he spent several years on the board and executive committee, and also served as Vice President. Dov has also been involved with AIPAC and Norpac, and is a long-standing board member of the MirYam Institute (fka Our Soldiers Speak), which is dedicated to fostering the flourishing of the State of Israel. Dov joined the board of JKHA/RKYHS in 2009, and after serving in different capacities and on various committees, he began his first term as President in 2016—a position he expects to retire from this year, coincidental with the graduation from RKYHS of his “babies” (now decidedly the tallest members of the family).

Debra and Dov continue to put significant efforts into supporting our local Jewish community and institutions, as well as Jewish education and continuity writ large. However, their proudest accomplishments are Ruthie (RKYHS ‘18, currently attending Yeshiva University Stern College for Women), Josh (RKYHS ‘20, currently completing his second year at Yeshivat Hakotel), and their twins Benjamin and Daniel (RKYHS ‘22, heading off to spend next year learning in Israel). However much time and effort Debra and Dov contributed towards our Yeshiva, they feel that they received exponentially more back in the form of the school’s role in helping their children to develop into the incredible young adults they are today. Though they appreciate the kindness of JKHA/RKYHS honoring them at this year’s dinner, Debra and Dov feel that they are the ones that owe a tremendous debt of gratitude to the Institution and all of its devoted professionals.