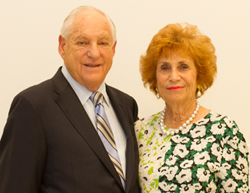 STEPHEN AND DEDEE LOVELL began working for Jewish organizations as a young couple and have served the Jewish community with passion and dedication ever since. They became involved in the Conservative Movement while active members of Temple Beth Sholom in Roslyn, New York; Stephen as a member of the synagogue board of trustees, and as financial officer and president, and Dedee as chairperson of the Religious School Education Committee.
The couple’s longtime connection to JTS began in the early 1990s, when Stephen joined the Board of Overseers of The Rabbinical School and subsequently the Board of Trustees. JTS honored Stephen in 1990 with its Second Century Award for dedicated service to synagogue, community, and the Conservative Movement. Together, Stephen and Dedee have been tireless and generous supporters and valued members of the JTS family.

Stephen and Dedee have been active in numerous other Jewish organizations here and abroad, including UJA-Federation of New York, Hillel, the Jewish National Fund, the American Technion Society, and the Schechter Institutes, where Stephen is a board member.

Until 2015, Stephen served as chairman of the board of Lovell Safety Management Co., a business founded by his father in 1938. Dedee, who has a master’s degree in counseling, has worked at Memorial Hospital and at St. Francis Hospital as ombudsman, and has served on the board of the North Shore Child & Family Guidance Center. The Lovells have three children and nine grandchildren. They agree that what they are most proud of is the impact that JTS has made in their lives, the lives of their children, and in advancing their grandchildren’s Jewish educations. 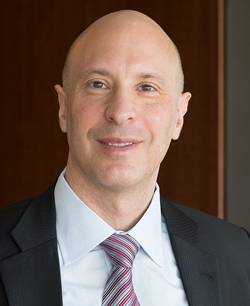 ELISHA WIESEL is co-chief information officer of Goldman Sachs. He joined Goldman Sachs in 1994 as a strategist in the commodities business and also served as the chief risk officer of the securities division. He was named managing director in 2002 and partner in 2004. Elisha earned a BS in computer science from Yale University in 1994.
He has been active in local non-profits serving at-risk youth in New York City since 2002, when he joined the board of Groundwork, and then continued on to Good Shepherd Services in 2010. Elisha stepped down from the board in 2016 after having rebooted the Midnight Madness all-night urban puzzle-solving experience into a multi-million-dollar fundraising platform for local communities and a signature creative experience for the broader financial community.
Since Elie Wiesel’s passing in 2016, Elisha speaks selectively at events and for causes
where he feels he can be helpful in reinforcing his father’s messages and values.
Administrative Login   Play Ads Full Screen With Controls