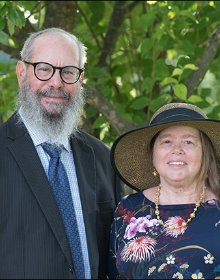 Register
Share with your family and friends.
Jack was born and brought up on the Lower East Side of Manhattan, the product of a multiple mixed marriage. His lineage was Litvack and Galitzianer, Chassidic and Misnagdic, Manhattan and Queens. True to this diverse tradition, Jack left the Lower East Side for college on the Upper West Side where he joined what is undoubtedly the only collegiate ice hockey team with 2 Shomrei Shabbos goalies. After completing college, Jack flew off to the Left Coast for graduate school in Seattle. There, Jack joined a small, but vibrantly diverse Jewish community – first Yom Kippur in Seattle hosted by descendants of the millennia-old Roman Jewish Community. a YU-trained Hillel Rabbi, the 1st Lubavitch Shluchim in the Northwest, Turkish and Isle of Rhodes communities. Most importantly, in Seattle, Jack met a beautiful, blond Left Coast girl Celia Dorner.

Celia met Jack at the University of Washington in 1971 and was immediately smitten with his take-no-prisoners intellect, his commitment to Jewish "stuff" and his regular supply of kosher meat from Denver. Married in 1974, they moved to Great Neck in 1986 to be closer to the NSHA and to live in an observant community that didn't castigate them endlessly for not stopping at two children. Great Neck Synagogue's uniquely diverse congregation, fine davening and full-throttle youth program were an unanticipated big plus.

Celia joined Jack in NYC where they married in 1974. After completing graduate school Jack began a long career in Information Technology. In short order Celia and Jack were parents of 4 children, whom they began enrolling in NSHA. The pull of NSHA proved strong so they moved to Great Neck in 1986 just before the birth of their 5th child. They found Great Neck Synagogue with its welcoming and diverse membership to be just the thing for the family.

What a great decision this was. Jack spent 15 years coaching little league and has graduated to watching our grandchildren playing baseball for GNS teams in the same Yeshiva league in which his sons played. Jack is also lucky enough to be able to attend grandchildren’s hockey games, school plays, concerts and graduations. It’s sometimes hard to believe that our family, which is deeply rooted in Great Neck Synagogue, has over two generations so far celebrated 6 Bat Mitzvahs, 5 Bar Mitzvahs and 4 Aufrufs and weddings.  As we look back, we also look forward to sharing many more Smachot with our GNS family.

Over the years, Celia has channeled her inner dilettante by doing art and calligraphy for the Sisterhood and Men's Club, cooking and baking for the Hunger Initiative and Bat Mitzvah lessons and Torah and Megillah reading for the Women's Tefillah. She appreciates the many committed, warm-hearted, good humored and sharp dressing people at GNS, as well as being able to sing high harmony in the Women's West Balcony without anyone complaining about Kol Isha. She still finds it hard to believe that three generations of the family are active in the Synagogue.