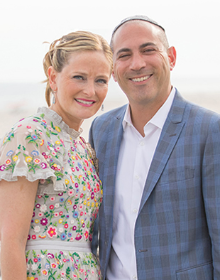 Register
Share with your family and friends.
Davida and Marc Yehaskel both grew up with a natural love and commitment to Judaism and Torah. Marc was raised in Great Neck and went to North Shore Hebrew Academy. His grandparents, Solomon and Lucy Yehaskel a”h lived in great neck, as do his parents and all of his siblings and their children. Growing up across the street from Great Neck Synagogue, Marc learned from an early age what it meant to be part of the Great Neck Synagogue community. Over the years, Marc has developed a strong connection to the shul, going to groups there every Shabbos as a child, working in the Youth Department as a teenager, and later davening there as an adult. His strong roots brought him back to Great Neck to raise his children in 2008.

Davida was raised in Manhattan, and then Forest Hills, and learned from her parents and grandparents what it means to be a true supporter and to give back to the community. She has devoted tireless hours to the Mikvah, serving as treasurer for 4 years. Davida has served on many committees for the shul and has helped out in many ways over the years.

While Davida and Marc have done so much for GNS, Davida and Marc's dedication to the Jewish community goes far beyond GNS. They are active in their children’s schools, have been honored previously by American Friends of Bet El, and regularly host fundraisers for Mesivta Tiferes Yerushalayim.

Davida and Marc are beloved by both friends and colleagues. They each have contagious, upbeat personalities and are always there to help a friend. Their incredible middot have clearly rubbed off on their children, Shlomo, Leah, Shmuel, Charlotte and Nina, who are 4th generation Great Neck Synagogue members.