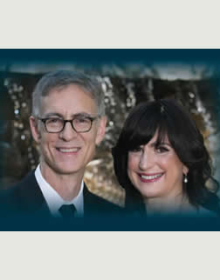 Sarah and Steve Karp are the proud parents of four JEC/Bruriah graduates and received a bonus when their son married a Bruriah girl. They are also the delighted grandparents of eleven, six of which give them daily hugs as they also attend the JEC.  The other grandchildren reside between Chicago and Israel respectively.

Steve, Executive Director of the Jewish Educational Center, has been in public service his entire life. His background and dedication to the Elizabeth/Hillside Jewish Community made him an excellent fit for the JEC where he began working in September, 2000.  Over the past two decades, Steve has maintained the day to day operations of the entire JEC system. During his tenure, the JEC expanded the Bruriah campus, renovated the science labs on both campuses to accommodate a state of the art STEM curriculum, refurbished the JEC’s Bais Medrash to become a beautiful, warm and welcoming space for davening and learning for the school and community, improved security measures in both school campuses and synagogues, and introduced and upgrade the IT infrastructure and classroom technology, to name just some of the positive projects he has overseen.

Steve’s public service was a natural outgrowth of his education. After graduation from SUNY, Buffalo, he received an advanced degree in Nonprofit Management from Columbia University’s Graduate School of Business. His experience includes working for the Office of the Comptroller for the City of New York as a liaison between community boards and civic groups, the United Jewish Council of the East Side as Associate Director responsible for administering all city funded social service programs, the Orthodox Union as Associate Director of the National Development Office. His volunteer work has included working as a Hatzalah member on the Lower East Side and in Elizabeth, the Elizabeth/Hillside Chevra Kadisha and working with the Jewish Federation of Greater MetroWest as part of the Yom Hashoah commemoration committee. Steve serves on the Board of Directors of the United Hebrew Committee of NY, and served on the Community Advisory Council of Beth Israel Medical Center, NYC.

Sarah joined the staff of the JEC Early Childhood Center 1988 as an assistant Primer teacher and in 2000 took over her own class as head teacher for the Kindergarten grade where she has redefined what it means to be an early childhood Morah.  She has earned the well-deserved reputation as an innovative, resourceful and caring educator.  Sarah strives to instill a lifelong love of learning and Midot Tovot in her students. Most evenings she will spend hours on the phone with young parents guiding and advising them through the new and wonderful experiences of raising a preschooler. Sarah is also a licensed Optician, working every Sunday in her field. Sarah was the driving force to move the family to Elizabeth NJ in 1987.  Growing up in Howard Beach, NY and commuting every day to Prospect Park Yeshiva in Brooklyn, Sarah insisted that her children be raised in a community with a high quality Yeshiva.

The JEC is proud to honor Steve and Sarah Karp as Grandparents of the Year, and Steve as our Rav P. M. Teitz Legacy Awardee.