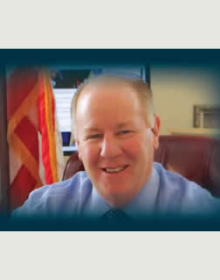 Now in his thirtieth year as Mayor of Elizabeth, a diverse city of 137,298 and the fourth largest city in New Jersey, J. Christian Bollwage has created a more efficient city government while sparking $800 million in economic redevelopment. Before becoming Mayor, he was a Councilman for 10 years, serving as Council President in 1989 and a member of the Elizabeth Planning Board for four years. Mayor Bollwage is a native of the city, was elected to his first term in 1992, and was reelected in November. He announced his vision of the future of Elizabeth, which included "Go-Green" initiatives, collegiate corridor concept, remodeling of Midtown train station, and expansion of economic development, recreation, housing and transportation.

The Mayor lives in the Elmora Section with his wife Nancy, and they are the proud parents of their daughter, Jacqueline.