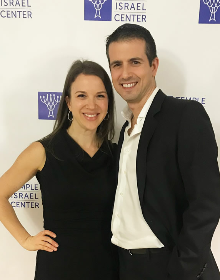 Tickets/Place Ad/Donate
Share with your family and friends.
Brittany and Scott joined Temple Israel Center in 2015, shortly after they toured the TIC Nursery School for their oldest daughter Samantha. The tour included a fortuitous meeting with the Shorashim director, and eventually a connection with Rabbi Gordon Tucker. Rabbi Tucker invited Brittany for coffee to discuss the family’s potential membership at TIC. The casual coffee date ended up lasting several hours and was followed some months later by a Shabbat weekend at TIC, where Brittany and Scott  met people who would become some of their closest TIC friends. It was immediately clear they had found their spiritual home, and nursery school too!

Since then, they have welcomed two more daughters, whose baby namings were celebrated at TIC. Samantha is in 3rd grade and Allison is in Kindergarten at The Leffell School after both graduated from TIC Nursery School. Two year old Charlotte attends pre-school in White Plains with other friends from TIC.

From almost the moment they arrived, Brittany has thrown herself fully into the community through volunteer work and community engagement. She has served as Class Parent and PTO Co-chair at the Nursery school, has been a member of the Board of Trustees since 2018, served on the Young Couples Committee, the Nursery School Director Search Committee, and is currently on the Assistant Rabbi Search Committee. She participated in the United Synagogue for Conservative Judaism Emerging Leaders program in 2016, serves on the Chesed committee and loves to help pack mishloach manot every year for Purim. For the 2018 gala/celebration of Rabbi Gordon Tucker, Brittany served on the décor committee and in 2020 she oversaw the auction component of the gala – probably the last big gathering most of us attended!

One of the most impactful causes Brittany has become involved with through TIC is local refugee resettlement. She signed up in 2017 to help resettle a refugee family from Afghanistan, specifically to find and furnish a suitable apartment with very short notice. Working with other TIC members and a network of friends, she helped to find an apartment and furnish it completely, including toys and stuffed animals her daughters eagerly donated to the children. She did the same for another Afghani refugee family in 2019 and has recently taken on a new case of a 20-year-old refugee from El Salvador who is expecting her first child. These causes are close to Brittany’s heart as she tries to provide these families with comfort and necessities as they navigate their new lives. The famous line from Leviticus speaks to her: “The stranger who resides with you shall be to you as one of your citizens; you shall love him as yourself, for you were strangers in the land of Egypt.” Scott and Brittany were once strangers at TIC and Leffell and they now feel welcomed and fully integrated into the community. Brittany hopes she can give others a similar feeling through her refugee resettlement work.

As many others know, volunteer work at TIC is almost always a family affair. So although Scott has not had his name listed on as many committees, there is almost nothing Brittany does that Scott does not become involved with, willingly or not! He has helped set up for the gala multiple times, delivered Hanukkah gift baskets when Brittany signed up for too many, made multiple trips to Michaels craft store, wrapped gift baskets and formatted the catalog for the 2020 auction, has built and transported furniture for refugee families and of course, helps to pack mishloach manot every year.

Brittany and Scott met in 1999 during their senior year of high school and have been together more than half their lives. After college, they lived in New York and London before settling in Scarsdale.

Brittany and Scott are humbled to receive this honor and are grateful to have all of TIC’s inspiring clergy, lay leaders and members as their friends. They are so happy to bring their daughters up in this wonderful community and can’t wait to resume the full Shabbat experience which they miss greatly – especially Kiddush. Mazel Tov to Judith and Neil on being honored this year. We aspire to serve the community as well as they have!