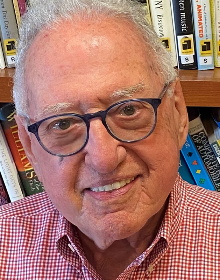 Place Tribute/Reservation
Share with your family and friends.
Two themes have run strongly and concurrently through the life and careers of attorney Lawrence (Larry) Lerner.  Even as he was building a pre-eminent intellectual law practice in NJ, he applied his talents to the inter-relationship between social justice needs and the rule of law.  In the 1960’s, he represented dozens of pro bono racial discrimination cases and led a coalition of groups fighting for justice in housing and employment in NJ.  Simultaneously, he successfully pursued cases before the NJ Supreme Court that reapportioned NJ on “one man, one vote.”  He was also able to obtain an injunction to remove the liquor license of a famous national organization that discriminated on the basis of race.

Larry is a graduate of the Newark College of Engineering with a degree in Electrical Engineering, and he also has a law degree from Georgetown University.  He is a member of the Bar of NJ, Pennsylvania and Virginia and has been admitted to practice before the United States Supreme Court.  The firm he founded, Lerner & David, in Cranford, NJ has over 60 attorneys and represents major companies around the world.

Starting in 1979, he devoted much of his energies to a concern for social justice in the Soviet Union.  This entailed multiple trips to the Soviet Union to visit with Refuseniks and ex-prisoners of conscience.  He helped found an organization that filed legal actions for political prisoners based on Soviet treaty obligations and the Constitution of the Soviet Union.

In 1996, after an unsuccessful campaign for the House of Representatives, Larry retired from the practice of law and devoted his activities to organizations whose purposes he could support.  He maintained his interest in the former Soviet Union and after a few years as an officer, he became the President of the Union of Council for Soviet Jews (UCSJ) in the former Soviet Union.  Today, this organization concentrates on fighting antisemitism and xenophobia, and promotes rights and the rule of law in Eastern Europe and Central Asia.  It has set up a religious freedom roundtable in the Ukraine, coordinating the activities of over 50 human rights organizations in the country.

In 1989, he became a member of the Board of the Education Fund for Israeli Civil Rights and Peace, the forerunner of MeretzUSA, a supporter of the Meretz party in Israel.

While in Weequahic High School, Larry was a member of the HaShomer HaTsair youth organization, and a supporter of the Meretz Party in Israel.  In this organization, he found a home for his views that Israel and the Palestinian Authority should settle their differences by sitting side-by-side with secure borders.  He served as President of MeretzUSA for many years and represented it at the World Zionist Congress for 15 years.

Larry continues his work for the UCSJ which has offices in Lviv and Washington, DC.  The UCSJ is presently raising funds for food and providing medical supplies for those in need in Ukraine.