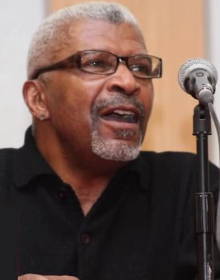 Place Tribute/Reservation
Share with your family and friends.
Darryl Rochester graduated from Weequahic High School in 1971 after having grown up on Johnson Avenue among a close-knit extended family and large circle of lifelong friends. Building on his foundation as a student in Kay Payne’s Dance Studio, Darryl’s love for the arts bloomed into his first career when he auditioned and was accepted in the famed Alvin Ailey Dance troupe. Unfortunately, Darryl soon suffered an injury which would bring an end to his dance career.

Darryl continued to embrace his artistic side by enrolling in the Wilfred Academy of Hair and Beauty Culture and Christine Valmy Beauty School in New York, receiving certifications from them both. With these certifications and the influences of his late mother Mabel and her dear friends, including Emily Miles "the grand dame of black style in Newark”, Darryl began taking the tri-state area fashion scene by storm. He was tapped by the legendary Al Murphy (who was obsessed with Emily Miles) to choreograph funky dance-theater pieces for Murphy’s highly extravagant fashion shows. Darryl and his dear friends, fashion designer Jaime McDonald and model Tommy Garrett, participated in these epic shows, as did such legends as Iman, Pat Cleveland, and Beverly Johnson, the first Black woman to grace the cover of Vogue Magazine. Around this time, Darryl opened his first salon in his family home on Keer Avenue. There, Darryl styled many of New Jersey’s hottest models and celebrities including Beverly Johnson, Pat Cleveland and one of his best friends, the groundbreaking Tracy “Africa'' Norman. He also styled participants of the legendary New York Ball culture and over the years was a premier stylist at Bamberger’s, the famous Soul Scissors Salon, and Avalon Day Spa in Greenwich Village.

Darryl was central to the theatrical environment of this era.  Most notable was his association with the Club Le Jock, located on Halsey Street in Newark, an LGBTQ space that spawned the theatrical environment for the expression of free Black subjectivity and a precursor for similar cultural spaces throughout the tri-state area. Darryl's contributions to the LGBTQ community and cultural scene have been recorded in the Rutgers University Queer Newark annals. He later became a fixture at such legendary clubs as Zanzibar, Studio 54, The Garage, and The Loft.

Although Darryl did not have children of his own, he took great delight in being everyone’s Uncle Darryl; his many friends and clients were like his family. As a rite of passage, Uncle Darryl enjoyed taking his nieces clubbing to New York and New Jersey hot spots...after their hair and makeup were sufficiently snatched enough to make him proud. And while he also never married, his longtime relationship with Calvin Cleveland brought love and light to his life.

Darryl enjoyed traveling to places as far as Amsterdam; however, nothing could compare to his love for Martha’s Vineyard, where he traveled annually with his sister, Sandra and dear friend from Weequahic, Yvonne. He spent many a sunrise doing yoga on the Inkwell Beach and many lazy afternoons people watching in the front yard.

Darryl passed away on December 8, 2020, leaving behind a host of family, friends, classmates, and clients to dance on with the spirit he left behind.