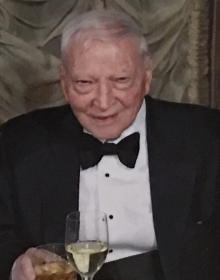 Place Tribute/Reservation
Share with your family and friends.
Melvin (Mel) grew up in Newark, NJ and after graduating from Weequahic High School, attended the Newark College of Engineering (now known as NJIT).  His college was interrupted by World War II.  Mel attended the US Navy Reserve Midshipman’s School at Cornell University and became a Lieutenant Junior Grade in the US Navy, serving as a Skipper on a Landing Craft Tank.

After the war, Mel attended Brooklyn Collegiate Polytechnic University (part of NYU’s School of Engineering and Science) where he earned his Master’s in Chemical Engineering.  He became an instructor at the Newark College of Engineering where he taught chemical engineering plant design for 20 years.

Mel was President and Chief Engineer at Reach Associates, Inc. a firm he founded in 1971, where he continued working until he passed away at the age of 100.

Mel was also associated with the national chemical engineering organization, the American Institute of Chemical Engineers (AIChE), and co-founded a chapter in Newark.   He received the highest honor the organization bestows on a member when he was elected as a Fellow of the AIChE, an honor given to only about 1% of the membership. The rank of Fellow recognizes achievements and contributions to the field of chemical engineering. Mel was a Fellow for over 25 years.

He loved camping and was very involved with the Boy Scouts of America serving as a Troop Leader in South Orange for many years.

Mel was married to the love his life, Sylvia, for 68 years until she passed away.  He was a devoted family man who was much loved by his son Andrew, daughter Mindy, many nieces, nephews, family, friends and business associates.
Administrative Login   Play Ads Full Screen With Controls